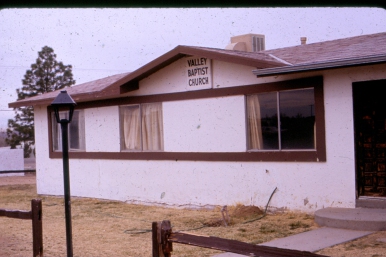 Pastor Sweeney and his wife Shirley became aware of the need for a church in the area, and of a group of people who were desireous of such. This group had met, with various short term preachers, but God had not yet sent a preacher, in the New Testament ( Bible ) foundations.

Bro & Mrs Sweeney visited the area and the group ( two families,  five people - one family being gone in extended travel ) and were burdened for the need in the area. Agreement was required for the group to totally realize that, if Bro Sweeney accepted the call, every aspect of the work would become NEW... New Testament, Independent Baptist doctrine and practice to be that of the new mission. The name VALLEY BAPTIST CHURCH was the only thing to be retained. This was agreed upon, and Bro Sweeney was called to begin an Independent Baptist mission work. Since only churches beg- at churches, a new work was now begun.Thus a new mission work was begun on February 20, 1977. The third family had returned on this date, and the three families, with the Pastor & Mrs Sweeneys, presented themselves to the mission for membership. Some in the group required Scriptural baptism, which was accomplished.

The Lord blessed the beginnings of this New work and within months the property ( two acres and building ) at Hwy 6 and Damon St. was  acquired. The Lord has further blessed in our Lord Jesus Christ and the work has continued to grow.

Organization into as Independent Baptist Church was completed, by the grace of our Soereign God, on March 2, 1978 at the end of a three day revival. Bro Sweeney continued in the work as pastor of the new church.

Valley Baptist Church approved a constitution designed to keep it within the scope of God's verbally inspired, inerrant Word, with Christ our Lord as the only Head.